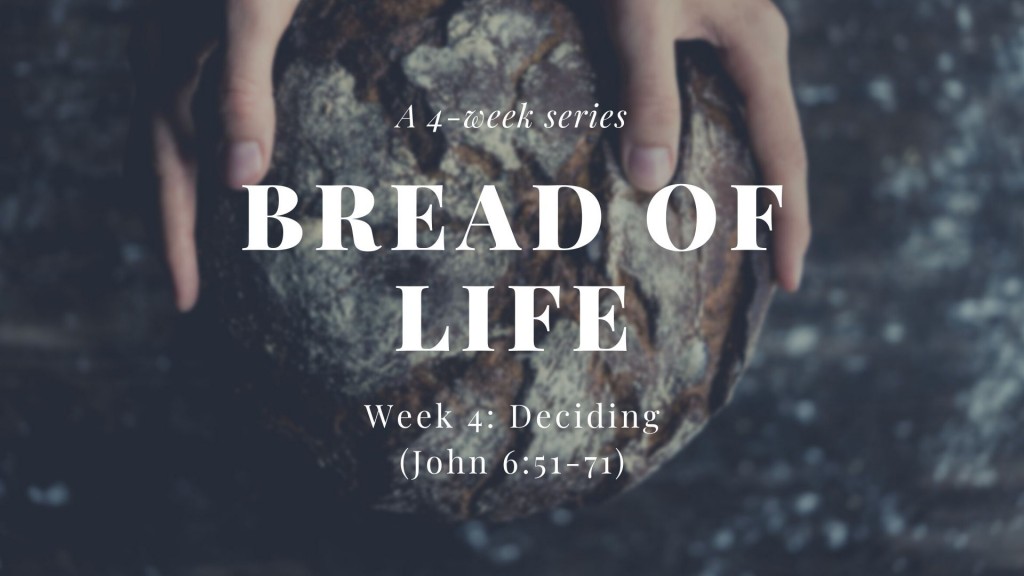 Join us as Simon finishes our 4-week series Bread of Life as we work our way through The Gospel of John.

51 I am the living bread that came down from heaven. Whoever eats this bread will live for ever. This bread is my flesh, which I will give for the life of the world.’

52 Then the Jews began to argue sharply among themselves, ‘How can this man give us his flesh to eat?’

53 Jesus said to them, ‘Very truly I tell you, unless you eat the flesh of the Son of Man and drink his blood, you have no life in you. 54 Whoever eats my flesh and drinks my blood has eternal life, and I will raise them up at the last day. 55 For my flesh is real food and my blood is real drink. 56 Whoever eats my flesh and drinks my blood remains in me, and I in them. 57 Just as the living Father sent me and I live because of the Father, so the one who feeds on me will live because of me. 58 This is the bread that came down from heaven. Your ancestors ate manna and died, but whoever feeds on this bread will live for ever.’ 59 He said this while teaching in the synagogue in Capernaum.

60 On hearing it, many of his disciples said, ‘This is a hard teaching. Who can accept it?’

61 Aware that his disciples were grumbling about this, Jesus said to them, ‘Does this offend you? 62 Then what if you see the Son of Man ascend to where he was before! 63 The Spirit gives life; the flesh counts for nothing. The words I have spoken to you – they are full of the Spirit and life. 64 Yet there are some of you who do not believe.’ For Jesus had known from the beginning which of them did not believe and who would betray him. 65 He went on to say, ‘This is why I told you that no one can come to me unless the Father has enabled them.’

66 From this time many of his disciples turned back and no longer followed him.

68 Simon Peter answered him, ‘Lord, to whom shall we go? You have the words of eternal life. 69 We have come to believe and to know that you are the Holy One of God.’

70 Then Jesus replied, ‘Have I not chosen you, the Twelve? Yet one of you is a devil!’ 71 (He meant Judas, the son of Simon Iscariot, who, though one of the Twelve, was later to betray him.)

More from 'Bread of Life'

Join us as Simon starts our new 4-week series Bread of Life as we work our way through The Gospel of John.