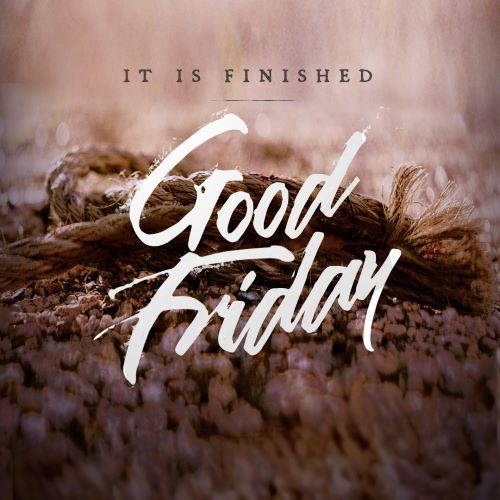 Join us for our Good Friday service as we remember the King who gave his life that we might live.

The video 'What's so good about Good Friday' can be viewed here.

26 As the soldiers led him away, they seized Simon from Cyrene, who was on his way in from the country, and put the cross on him and made him carry it behind Jesus. 27 A large number of people followed him, including women who mourned and wailed for him. 28 Jesus turned and said to them, ‘Daughters of Jerusalem, do not weep for me; weep for yourselves and for your children. 29 For the time will come when you will say, “Blessed are the childless women, the wombs that never bore and the breasts that never nursed!” 30 Then

‘“they will say to the mountains, ‘Fall on us!’

31 For if people do these things when the tree is green, what will happen when it is dry?’

32 Two other men, both criminals, were also led out with him to be executed. 33 When they came to the place called the Skull, they crucified him there, along with the criminals – one on his right, the other on his left. 34 Jesus said, ‘Father, forgive them, for they do not know what they are doing.’ And they divided up his clothes by casting lots.

35 The people stood watching, and the rulers even sneered at him. They said, ‘He saved others; let him save himself if he is God’s Messiah, the Chosen One.’

36 The soldiers also came up and mocked him. They offered him wine vinegar 37 and said, ‘If you are the king of the Jews, save yourself.’

38 There was a written notice above him, which read: THIS IS THE KING OF THE JEWS.

39 One of the criminals who hung there hurled insults at him: ‘Aren’t you the Messiah? Save yourself and us!’

40 But the other criminal rebuked him. ‘Don’t you fear God,’ he said, ‘since you are under the same sentence? 41 We are punished justly, for we are getting what our deeds deserve. But this man has done nothing wrong.’

42 Then he said, ‘Jesus, remember me when you come into your kingdom.’

43 Jesus answered him, ‘Truly I tell you, today you will be with me in paradise.’

44 It was now about noon, and darkness came over the whole land until three in the afternoon, 45 for the sun stopped shining. And the curtain of the temple was torn in two. 46 Jesus called out with a loud voice, ‘Father, into your hands I commit my spirit.’ When he had said this, he breathed his last.

47 The centurion, seeing what had happened, praised God and said, ‘Surely this was a righteous man.’ 48 When all the people who had gathered to witness this sight saw what took place, they beat their breasts and went away. 49 But all those who knew him, including the women who had followed him from Galilee, stood at a distance, watching these things.

Life amidst the wondering

Join us as we celebrate that Jesus has defeated death - He is the risen one who is King forever!

This week is an All-Age Palm Sunday service with Family Communion.

One of the things we are encouraging people to do is to bring some palm leaves and/or a palm-like plant to place at the front of church prior to the start of worship. We'd encourage not just any plant but specifically palm-like ones...

Why palms? See [this blog post](https://www.gominno.com/blog/holy-week-history-what-is-palm-sunday) from minno.