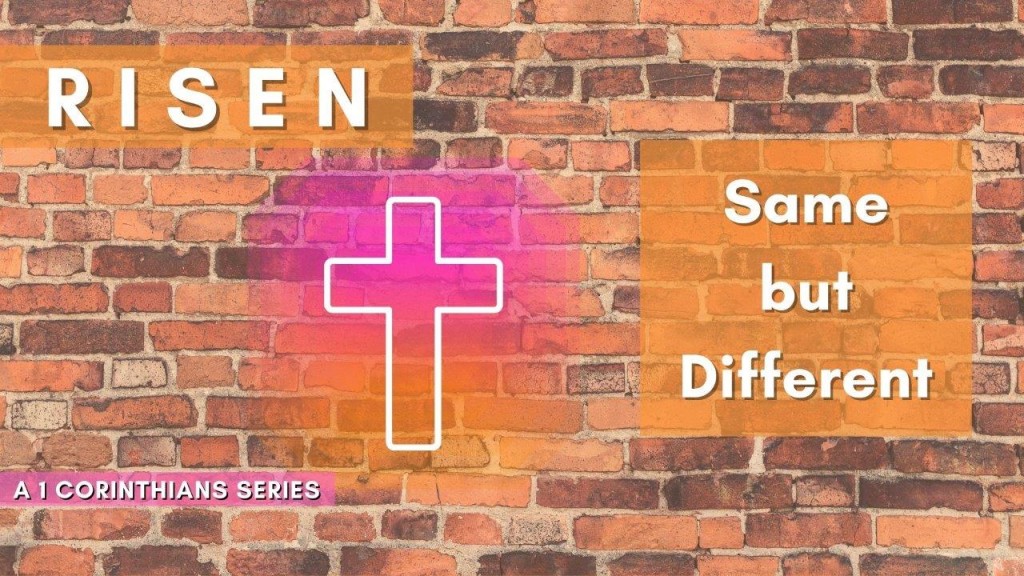 Join us this week as Graham Buxton continues our final series in 1 Corinthians, Risen, unpacking the chapters 15-16 of Paul's first letter to the church in Corinth.

35 But someone will ask, ‘How are the dead raised? With what kind of body will they come?’ 36 How foolish! What you sow does not come to life unless it dies. 37 When you sow, you do not plant the body that will be, but just a seed, perhaps of wheat or of something else. 38 But God gives it a body as he has determined, and to each kind of seed he gives its own body. 39 Not all flesh is the same: people have one kind of flesh, animals have another, birds another and fish another. 40 There are also heavenly bodies and there are earthly bodies; but the splendour of the heavenly bodies is one kind, and the splendour of the earthly bodies is another. 41 The sun has one kind of splendour, the moon another and the stars another; and star differs from star in splendour.

If there is a natural body, there is also a spiritual body. 45 So it is written: ‘The first man Adam became a living being’; the last Adam, a life-giving spirit. 46 The spiritual did not come first, but the natural, and after that the spiritual. 47 The first man was of the dust of the earth; the second man is of heaven. 48 As was the earthly man, so are those who are of the earth; and as is the heavenly man, so also are those who are of heaven. 49 And just as we have borne the image of the earthly man, so shall we bear the image of the heavenly man.

Where, O death, is your sting?’

56 The sting of death is sin, and the power of sin is the law. 57 But thanks be to God! He gives us the victory through our Lord Jesus Christ.

58 Therefore, my dear brothers and sisters, stand firm. Let nothing move you. Always give yourselves fully to the work of the Lord, because you know that your labour in the Lord is not in vain.

This week's Questions for Reflection are:

More from 'Risen (A 1 Corinthians Series)'

Join us online this week as Simon finishes our final series in 1 Corinthians, Risen, unpacking the final chapter of Paul's first letter to the church in Corinth.

As part of our service we will be acknowledging and celebrating the ministry of the Steven family who served for many years in Nepal and returned to Adelaide earlier this year. Join us as we give thanks for of all that God has been doing through them and continues to do in Nepal.

Both the Cross and the Resurrection

Join us this week as Tim Patrick starts our final series in 1 Corinthians, Risen, unpacking the chapters 15-16 of Paul's first letter to the church in Corinth.