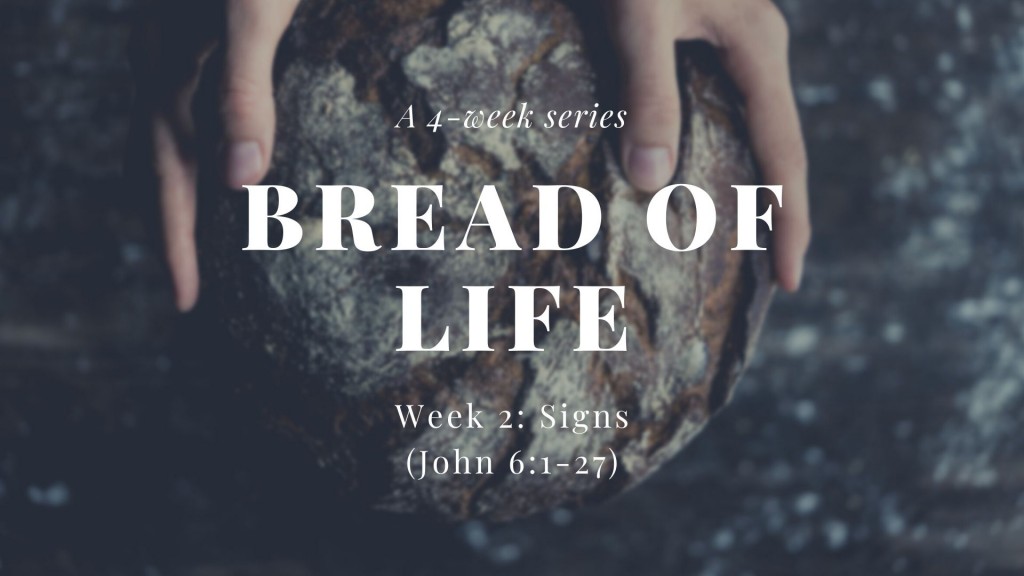 1 Some time after this, Jesus crossed to the far shore of the Sea of Galilee (that is, the Sea of Tiberias), 2 and a great crowd of people followed him because they saw the signs he had performed by healing those who were ill. 3 Then Jesus went up on a mountainside and sat down with his disciples. 4 The Jewish Passover Festival was near.

5 When Jesus looked up and saw a great crowd coming towards him, he said to Philip, ‘Where shall we buy bread for these people to eat?’ 6 He asked this only to test him, for he already had in mind what he was going to do.

7 Philip answered him, ‘It would take more than half a year’s wages to buy enough bread for each one to have a bite!’

8 Another of his disciples, Andrew, Simon Peter’s brother, spoke up, 9 ‘Here is a boy with five small barley loaves and two small fish, but how far will they go among so many?’

10 Jesus said, ‘Make the people sit down.’ There was plenty of grass in that place, and they sat down (about five thousand men were there). 11 Jesus then took the loaves, gave thanks, and distributed to those who were seated as much as they wanted. He did the same with the fish.

12 When they had all had enough to eat, he said to his disciples, ‘Gather the pieces that are left over. Let nothing be wasted.’ 13 So they gathered them and filled twelve baskets with the pieces of the five barley loaves left over by those who had eaten.

14 After the people saw the sign Jesus performed, they began to say, ‘Surely this is the Prophet who is to come into the world.’ 15 Jesus, knowing that they intended to come and make him king by force, withdrew again to a mountain by himself.

16 When evening came, his disciples went down to the lake, 17 where they got into a boat and set off across the lake for Capernaum. By now it was dark, and Jesus had not yet joined them. 18 A strong wind was blowing and the waters grew rough. 19 When they had rowed about three or four miles, they saw Jesus approaching the boat, walking on the water; and they were frightened. 20 But he said to them, ‘It is I; don’t be afraid.’ 21 Then they were willing to take him into the boat, and immediately the boat reached the shore where they were heading.

22 The next day the crowd that had stayed on the opposite shore of the lake realised that only one boat had been there, and that Jesus had not entered it with his disciples, but that they had gone away alone. 23 Then some boats from Tiberias landed near the place where the people had eaten the bread after the Lord had given thanks. 24 Once the crowd realised that neither Jesus nor his disciples were there, they got into the boats and went to Capernaum in search of Jesus.

25 When they found him on the other side of the lake, they asked him, ‘Rabbi, when did you get here?’

26 Jesus answered, ‘Very truly I tell you, you are looking for me, not because you saw the signs I performed but because you ate the loaves and had your fill. 27 Do not work for food that spoils, but for food that endures to eternal life, which the Son of Man will give you. For on him God the Father has placed his seal of approval.’

Here are this week's Questions for Reflection:

More from 'Bread of Life'

Join us as Simon finishes our 4-week series Bread of Life as we work our way through The Gospel of John.

Join us as Simon starts our new 4-week series Bread of Life as we work our way through The Gospel of John.