Temptation: Warning and a Way Out 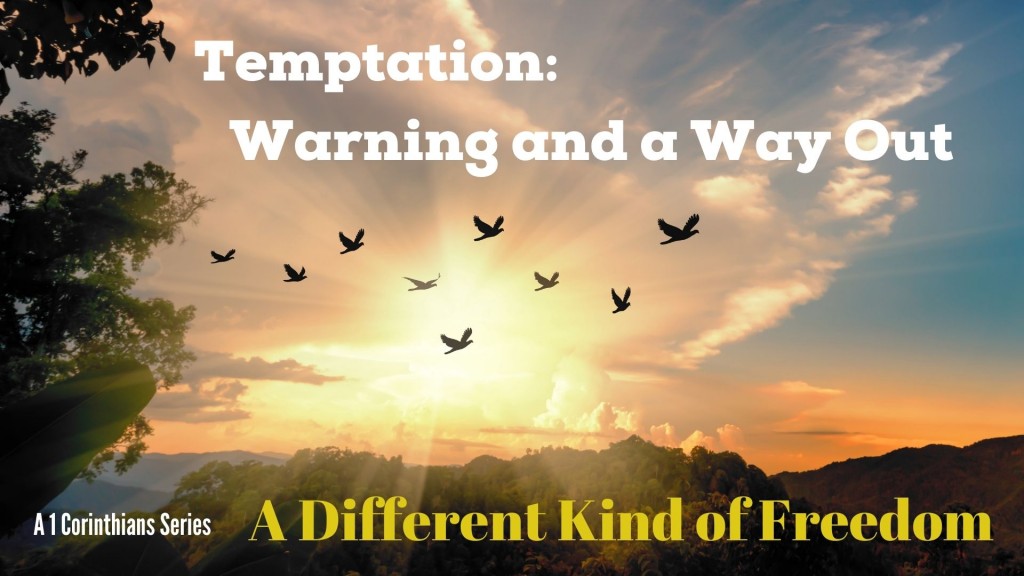 1 For I do not want you to be ignorant of the fact, brothers and sisters, that our ancestors were all under the cloud and that they all passed through the sea. 2 They were all baptised into Moses in the cloud and in the sea. 3 They all ate the same spiritual food 4 and drank the same spiritual drink; for they drank from the spiritual rock that accompanied them, and that rock was Christ. 5 Nevertheless, God was not pleased with most of them; their bodies were scattered in the wilderness.

11 These things happened to them as examples and were written down as warnings for us, on whom the culmination of the ages has come. 12 So, if you think you are standing firm, be careful that you don’t fall! 13 No temptation has overtaken you except what is common to mankind. And God is faithful; he will not let you be tempted beyond what you can bear. But when you are tempted, he will also provide a way out so that you can endure it.

14 Therefore, my dear friends, flee from idolatry. 15 I speak to sensible people; judge for yourselves what I say. 16 Is not the cup of thanksgiving for which we give thanks a participation in the blood of Christ? And is not the bread that we break a participation in the body of Christ? 17 Because there is one loaf, we, who are many, are one body, for we all share the one loaf.

18 Consider the people of Israel: do not those who eat the sacrifices participate in the altar? 19 Do I mean then that food sacrificed to an idol is anything, or that an idol is anything? 20 No, but the sacrifices of pagans are offered to demons, not to God, and I do not want you to be participants with demons. 21 You cannot drink the cup of the Lord and the cup of demons too; you cannot have a part in both the Lord’s table and the table of demons. 22 Are we trying to arouse the Lord’s jealousy? Are we stronger than he?

Join us this week as Simon finishes our series A Different Kind of Freedom unpacking the chapters 9-11 of Paul's first letter to the church in Corinth (1 Corinthians).

Women and Men for the Gospel

You Kan - guru, you can: Living free by serving

Join us this week as Trevor starts our new series A Different Kind of Freedom unpacking the chapters 9-11 of Paul's first letter to the church in Corinth (1 Corinthians).