The Centurion and the Widow 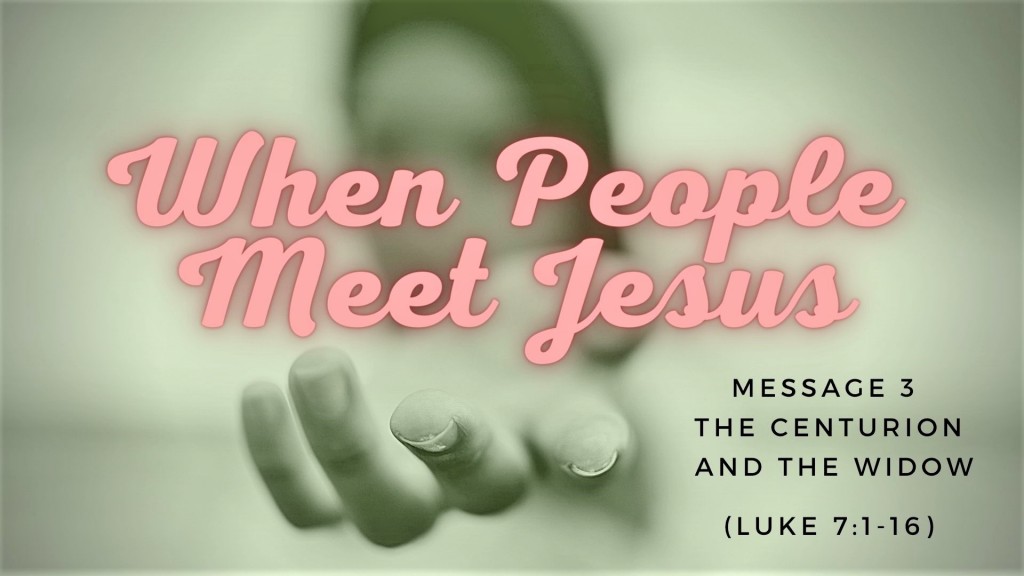 Join us as we worship together with Simon continuing our series: When People Meet Jesus.

1 When Jesus had finished saying all this to the people who were listening, he entered Capernaum. 2 There a centurion’s servant, whom his master valued highly, was ill and about to die. 3 The centurion heard of Jesus and sent some elders of the Jews to him, asking him to come and heal his servant. 4 When they came to Jesus, they pleaded earnestly with him, ‘This man deserves to have you do this, 5 because he loves our nation and has built our synagogue.’ 6 So Jesus went with them.

He was not far from the house when the centurion sent friends to say to him: ‘Lord, don’t trouble yourself, for I do not deserve to have you come under my roof. 7 That is why I did not even consider myself worthy to come to you. But say the word, and my servant will be healed. 8 For I myself am a man under authority, with soldiers under me. I tell this one, “Go”, and he goes; and that one, “Come”, and he comes. I say to my servant, “Do this”, and he does it.’

9 When Jesus heard this, he was amazed at him, and turning to the crowd following him, he said, ‘I tell you, I have not found such great faith even in Israel.’ 10 Then the men who had been sent returned to the house and found the servant well.

11 Soon afterwards, Jesus went to a town called Nain, and his disciples and a large crowd went along with him. 12 As he approached the town gate, a dead person was being carried out – the only son of his mother, and she was a widow. And a large crowd from the town was with her. 13 When the Lord saw her, his heart went out to her and he said, ‘Don’t cry.’

14 Then he went up and touched the bier they were carrying him on, and the bearers stood still. He said, ‘Young man, I say to you, get up!’ 15 The dead man sat up and began to talk, and Jesus gave him back to his mother.

16 They were all filled with awe and praised God. ‘A great prophet has appeared among us,’ they said. ‘God has come to help his people.’

More from 'When People Meet Jesus'

Join us as we worship together with Jethro finishing our current series: When People Meet Jesus.

The Pharisee and the Sinner

Join us as we worship together with Geoff Diment continuing our series: When People Meet Jesus.

Join us as we worship together with Simon Dent starting our new series: When People Meet Jesus.