The secret to a fruitful life 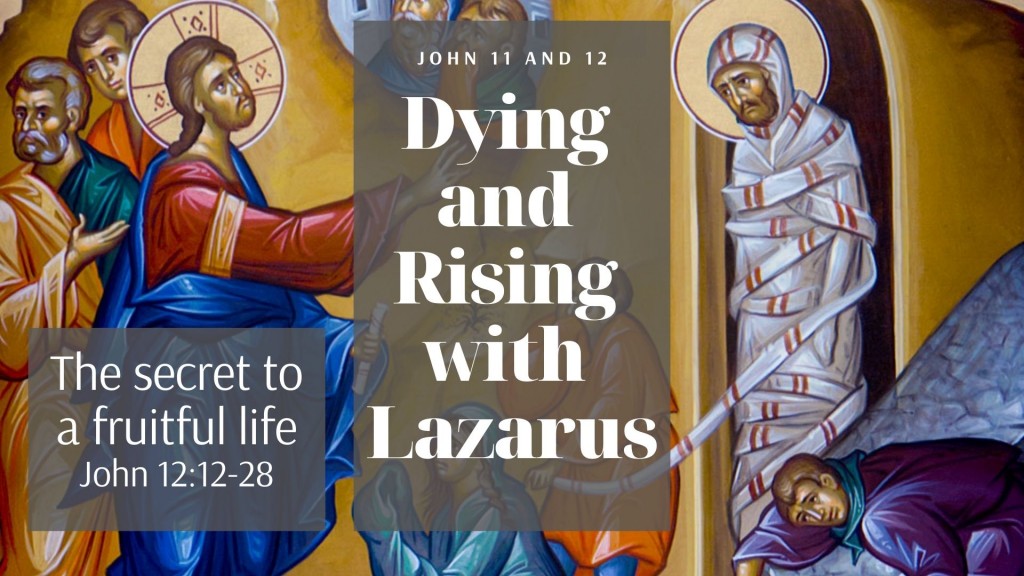 Join us as Simon finishes our short series Dying and Rising with Lazarus as we work our way through The Gospel of John.

12 The next day the great crowd that had come for the festival heard that Jesus was on his way to Jerusalem. 13 They took palm branches and went out to meet him, shouting,

‘Blessed is he who comes in the name of the Lord!’

‘Blessed is the king of Israel!’

14 Jesus found a young donkey and sat upon it, as it is written:

see, your king is coming,

seated on a donkey’s colt.’

17 Now the crowd that was with him when he called Lazarus from the tomb and raised him from the dead continued to spread the word. 18 Many people, because they had heard that he had performed this sign, went out to meet him. 19 So the Pharisees said to one another, ‘See, this is getting us nowhere. Look how the whole world has gone after him!’

20 Now there were some Greeks among those who went up to worship at the festival. 21 They came to Philip, who was from Bethsaida in Galilee, with a request. ‘Sir,’ they said, ‘we would like to see Jesus.’ 22 Philip went to tell Andrew; Andrew and Philip in turn told Jesus.

23 Jesus replied, ‘The hour has come for the Son of Man to be glorified. 24 Very truly I tell you, unless a grain of wheat falls to the ground and dies, it remains only a single seed. But if it dies, it produces many seeds. 25 Anyone who loves their life will lose it, while anyone who hates their life in this world will keep it for eternal life. 26 Whoever serves me must follow me; and where I am, my servant also will be. My Father will honour the one who serves me.

27 ‘Now my soul is troubled, and what shall I say? “Father, save me from this hour”? No, it was for this very reason I came to this hour. 28 Father, glorify your name!’

Then a voice came from heaven, ‘I have glorified it, and will glorify it again.’

More from 'Dying and Rising with Lazarus'

Join us as Steve Kaesler finishes our short series Dying and Rising with Lazarus as we work our way through The Gospel of John.

Taking off the grave clothes

Join us as Simon starts our short series Dying and Rising with Lazarus as we work our way through The Gospel of John.