Where is bread and wine?

28 February, 2021Simon DentLamentations: Hope in the midst of agony 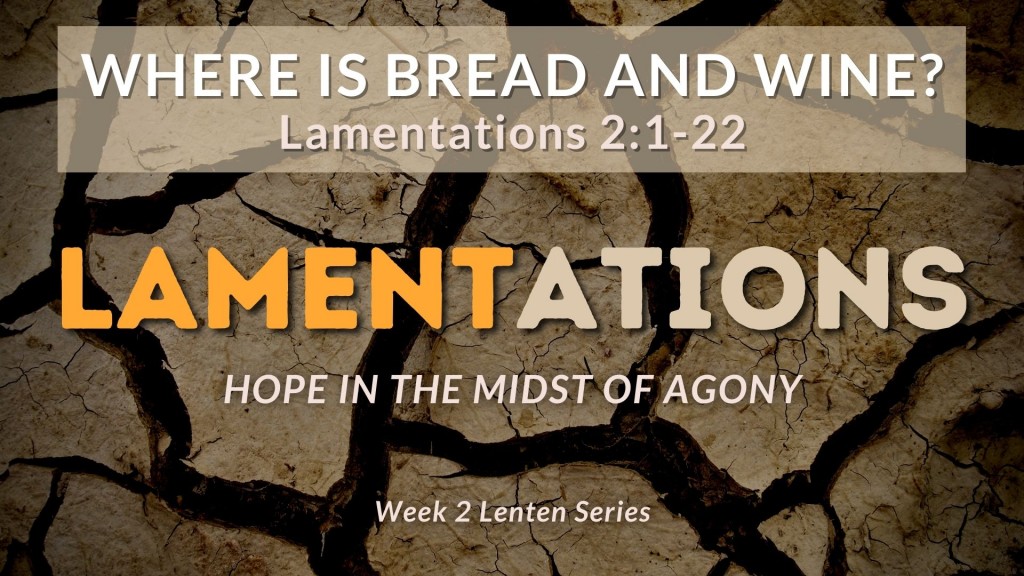 1 How the Lord has covered Daughter Zion

with the cloud of his anger!

He has hurled down the splendour of Israel

from heaven to earth;

he has not remembered his footstool

in the day of his anger.

2 Without pity the Lord has swallowed up

all the dwellings of Jacob;

in his wrath he has torn down

the strongholds of Daughter Judah.

He has brought her kingdom and its princes

down to the ground in dishonour.

3 In fierce anger he has cut off

every horn of Israel.

He has withdrawn his right hand

at the approach of the enemy.

He has burned in Jacob like a flaming fire

that consumes everything around it.

his right hand is ready.

all who were pleasing to the eye;

on the tent of Daughter Zion.

he has swallowed up Israel.

He has swallowed up all her palaces

and destroyed her strongholds.

He has multiplied mourning and lamentation

6 He has laid waste his dwelling like a garden;

he has destroyed his place of meeting.

The Lord has made Zion forget

her appointed festivals and her Sabbaths;

in his fierce anger he has spurned

both king and priest.

7 The Lord has rejected his altar

and abandoned his sanctuary.

He has given the walls of her palaces

into the hands of the enemy;

they have raised a shout in the house of the Lord

as on the day of an appointed festival.

8 The Lord determined to tear down

the wall around Daughter Zion.

He stretched out a measuring line

and did not withhold his hand from destroying.

He made ramparts and walls lament;

together they wasted away.

9 Her gates have sunk into the ground;

their bars he has broken and destroyed.

Her king and her princes are exiled among the nations,

the law is no more,

and her prophets no longer find

visions from the Lord.

10 The elders of Daughter Zion

sit on the ground in silence;

they have sprinkled dust on their heads

and put on sackcloth.

The young women of Jerusalem

have bowed their heads to the ground.

11 My eyes fail from weeping,

I am in torment within;

my heart is poured out on the ground

because my people are destroyed,

because children and infants faint

in the streets of the city.

12 They say to their mothers,

‘Where is bread and wine?’

in the streets of the city,

as their lives ebb away

in their mothers’ arms.

With what can I compare you,

To what can I liken you,

that I may comfort you,

Your wound is as deep as the sea.

Who can heal you?

14 The visions of your prophets

were false and worthless;

they did not expose your sin

to ward off your captivity.

The prophecies they gave you

were false and misleading.

15 All who pass your way

clap their hands at you;

they scoff and shake their heads

‘Is this the city that was called

the perfection of beauty,

the joy of the whole earth?’

16 All your enemies open their mouths

they scoff and gnash their teeth

and say, ‘We have swallowed her up.

This is the day we have waited for;

we have lived to see it.’

17 The Lord has done what he planned;

he has fulfilled his word,

which he decreed long ago.

He has overthrown you without pity,

he has let the enemy gloat over you,

he has exalted the horn of your foes.

18 The hearts of the people

cry out to the Lord.

You walls of Daughter Zion,

give yourself no relief,

your eyes no rest.

as the watches of the night begin;

in the presence of the Lord.

Lift up your hands to him

for the lives of your children,

who faint from hunger

at every street corner.

Should women eat their offspring,

the children they have cared for?

Should priest and prophet be killed

in the sanctuary of the Lord?

21 ‘Young and old lie together

in the dust of the streets;

my young men and young women

have fallen by the sword.

You have slain them in the day of your anger;

you have slaughtered them without pity.

so you summoned against me terrors on every side.

In the day of the Lord’s anger

no one escaped or survived;

those I cared for and reared

my enemy has destroyed.’

This week's questions for reflection is actually a task...

Over the next few days ask God to reveal to you something that breaks his heart in our world. Sit with the heart brokenness for a while before rushing on to prayer. How do you experience the Father’s pain? Spend some time with Jesus calling out to God to see and act.

More from 'Lamentations: Hope in the midst of agony'

A Prayer for Restoration

Join us as we worship together with Simon finishing our Lenten series on Lamentations.

How the gold has lost its lustre

Join us as we worship together with Tim Patrick continuing our Lenten series on Lamentations.

How lonely sits the city

Join us as we worship together with Simon starting our new Lenten series on Lamentations.